Ayurveda is all about doshas and their balance; this balance depends on many things, among which the major role plays food, activity and season. Each season has an influence on a particular dosha, and taking the right foods is one of the easiest ways to correct any possible imbalance. That is why we should consider following the Ayurvedic diet during winter.

The predominant dosha in winter is Kapha with its inherent qualities of patience and endurance, so it gives us the ability to go through this cold season smoothly. One of the main Kapha qualities is the mucus of phlegm, which increases during winter time. This manifests in the form of colds, coughs and running nose, especially in children. From one point there is nothing good about these 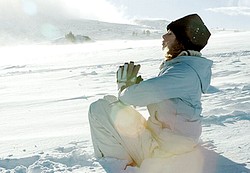 conditions, but actually the thick mucus that accumulates in the lungs during a cold or cough is protective. It envelops the harmful bacteria and viruses, preventing them from spreading to healthy parts of the body. The excess of mucus also helps to protect vulnerable mucosal surfaces from cold air.

Kapha promotes the body growth; it strengthens and enhances the natural immunity of the human body, lubricates the joints, moisturizes skin and the digestive system, improves memory and is responsible for vital functions of the heart and lungs.

If your body is healthy, the natural digestive power increases in winter. Winter cold is actually fueling Agni (digestive fire), making it stronger, which is also one of the qualities of Kapha. This helps us to digest heavier foods as well as consume larger food amounts. It’s easy to observe – we naturally tend to eat more in winter.

Regardless of our constitution, our Ayurvedic diet for winter season should include more of spicy, fatty, astringent and bitter foods. Exclude sour foods and eat less of sweets otherwise your immunity becomes weak. Cold drinks and frozen food should be minimized. The best idea to use foods with warming properties such as cream, butter, cheese, condensed milk, warm (hot) meals from cooked gains (especially wheat, oats and rice – consume rice hot since it has a natural cooling property), sweetened buckwheat, hot soups, Dahl (the soup made from lentils or other pulses), warm herbal teas and honey. Taking hot milk before bedtime is strongly recommended in the Ayurveda winter diet.

Among sweet spices anise and mint should not be used in winter, since they provide a cooling effect on the body. But you are free to use bitter, pungent and astringent herbs and spices since they are very useful for cold season.

Ayurvedic winter foods include more of the dried rather than fresh and raw foods to avoid the overabundance of prana, because it makes the entire body overexcited, especially the joints, spine and intestines. Another point to consider is the amount of moist in a food: the more of it in the food, the worse it is to consume during cold season. Eat dry berries instead of raw. If the weather gets too cold, eat less of dry fruits, but more of nuts to give yourself more calories and energy.

In essence, winter Ayurvedic tips suggest us following two paths: balance our own dosha ratio (as usual) and consider the Kapha season as well. It may be difficult in the beginning, but as you get used to it, following Ayurvedic principles becomes easier, especially, when you understand them and see the positive results.

Another thing I would like to mention is that people with Vata dosha should be careful during winter. Although it is considered to be the season of Kapha dosha, Vata also increases during that time, so take care of your skin and hair which get dry, and make sure to eat more of hot and liquid foods such as soups, liquid porridges and dahls (dal).

Winter is quite a good time for Pitta dosha, since it gets grounded with the cold, but they should also listen to their bodies to make sure everything is in a balance.