We have already touched the balancing diet for Vata dosha, now let’s see what are the best and the worst foods for Vata.

Preparing meals for Vata becomes much easier when you know the basic principles that operate the dosha. In Ayurvedic terms, Vata has such qualities as space (Akasha in Sanskrit) and air (Vayu). If these qualities or tendencies increase in a person with that dosha being predominant, then we say that Vata has come out of balance.

To remind you the key concepts of Vata diet: the food should be warm, moist and on time. Now let’s look at some specific topics considering Vata dosha meals. 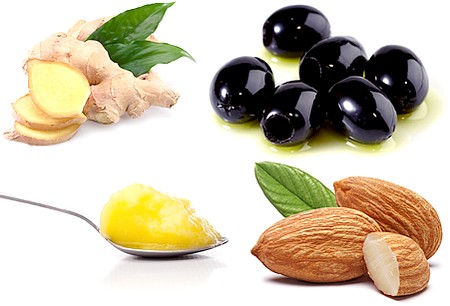 The following recommendations for Vata dosha balancing foods are given on the basis of opinions of such Ayurvedic authorities as Deepak Chopra, Robert Svoboda, David Frawley and Vasant Lad (you will see their opinions on particular foods will differ sometimes).

Vata dosha and juicing are good friends normally, though not all the juices are recommended.

Should you eat eggs? Well, traditionally Ayurveda is against the consumption of any food of animal origin except dairy products. But if you want to know whether eggs increase Vata or not, the answer is they don’t.

As a rule, almost all sweet and juicy fruits are fine.

According to David Frawley, fruits in general are light, and can contribute to Vata aggravation, therefore he advises people with predominant Vata dosha against following a fruit-only based diet.

The majority of Ayurvedic authors agree that garlic is fine for Vata. It also helps to control blood pressure. You can use the following recipe: take 1 gm of garlic, make a paste out of it, and add it to a glass of buttermilk. Drink this substance twice a day – it will help you to lower your blood pressure. Other benefits of garlic include the lowering of cholesterol levels and preventing the heart disease.

Another thing to mention is that in terms of Gunas (the qualities of material Nature according to Ayurvedic concepts) garlic is considered to be a tamasic food (a food with a low energetic quality), while it is recommended to consume more sattvic (higher quality in terms of energy level) food, which is naturally healthy and brings peace to mind. The majority of vegetarian foods are considered to be sattvic, some rajasic (of fiery nature).

So, if you have to consume garlic, better have it as a medicine rather than part of your regular meals.

Almost all dairy products are good for Vata.

Most dairy products are beneficial for people with Vata constitution. It’s better to consume them warm and with spices. Milk will be digested easier when boiled, but drink it separately from other meals, because otherwise it may cause the worsening of your digestion and bloating.

Fermented dairy products are better for Vata than plain milk, because they digest easier and give Vata dosha more nourishment.

Cow ghee is praised in Ayurvedic texts as a substance that can grant health and longevity. The main qualities of ghee are: oily, heavy, slow, soft, liquid and dense. It also has sweet taste. You have probably figured out by now that ghee is very beneficial for Vata dosha (as well as for Pitta). It helps with the elimination of wastes, and directs Vata downwards, ‘grounding’ it.

Ghee lubricates our digestive tract, reduces flatulence and alleviates hardness in bowels. All these are sure-fire signs of imbalanced Vata, and ghee deals with all of them. Due of its laxative qualities it treats and prevents constipation, which is quite useful for Vatas, and is very helpful during pregnancy.

Ghee can balance your doshas, but keep in mind that it increases Kapha in the body, so if you advise it to your friend who has Kapha as the predominant dosha, tell them not to take too much of ghee.

Experts are quite unanimous when it comes to grains for Vata. And they say that this dosha can actually consume all grains and cereals, even those that are not really beneficial for it (the latter should be consumed less frequently though).

David Frawley says that during some Vata imbalances, related to Ama (toxins) accumulation, some grains that should be avoided, can actually be beneficial, for example, barley can be helpful for arthritis.

Rice is usually taken as a ‘food for rescue’, which Vatas can take even when no other food can be digested. But yeast bread and dry breakfasts of various kinds are not recommended.

Actually, it is not. Like black tea, green tea can aggravate Vata. As an alternative, you can choose a herbal tea.

There are many herbs you can use to prepare a tea. Here is the list of herbs and plants to favor and to avoid.

As a general rule, all vegetables should be cooked (though having a raw salad occasionally is acceptable).

Although the experts may differ in opinions on what veggies are acceptable and what are not, the general idea is that vegetables are not the best food for people with Vata dosha due to their dryness and lightness. Hence the need to cook them before eating with the solid amount of oil and spices. If you want to consume raw veggies, it’s better to make a juice out of them. Be careful with vegetables if your joints or muscles are stiff and painful, since it may be the sign of the significant amounts of toxins accumulated in them.

Beans and Lentils for Vata Dosha

All experts agree that the beans are not the best food for Vata and are suitable for occasional consumption only. Mung Dahl is an exception, since it is easy to digest, and is known to balance all doshas if cooked properly.

In Vatas’ case, all the legumes should be cooked with lots of spices, especially turmeric. Before cooking, legumes should be soaked in water for several hours. Robert Svoboda suggests boiling the soaked beans for 5-10 minutes, then drain water, and only after that use them for cooking.

My notes: I used to eat both lentils (red and brown) quite often, and I must say that they can be fine for Vata; you only need to add enough oil or butter (or ghee) to them (I add oil to a ready dish), and cook them well, of course – this way lentils will not substantially increase your Vata. I like them for breakfast because lentils are very nourishing and rather easy to digest. And I do it them once I have a chance to.

All authors are unanimous in the opinion that all the spices are favorable for Vata. The only thing to consider is the large amount of pungent spices – they can sear Vata, thus exacerbating it.

The best spices are asafoetida, ginger and garlic, but do not use them too much. You can use a cool fennel or sandalwood tea to reduce the dying effect of asafoetida.

Nuts in general are considered to be good for Vata due to their grounding, nourishing and heavy nature. But you should eat them moderately to avoid overexerting your digestion.

Avoid: according to Vasant Lad, there are no ‘bad’ nuts for Vata, while David Frawley considers roasted peanuts to be unfavorable.

Robert Svoboda believes that almonds are the best nuts for Vatas. But you should avoid eating it along with the husk, and you should not scald it to remove the shell. The best way is to soak almonds in water overnight, and remove the husk in the morning. If you eat 10 almonds in the morning, you will get the nutrients for the whole day.

Favor: sesame, ghee, olive oil, and the majority of other plant oils (coconut and avocado are better used externally).

Robert Svoboda writes that almond oil is good for the brain; coconut and sesame oil are great for hair, and mustard oil can be used on the skin.

Although the sweet taste is beneficial for the dosha, you should not abuse it – consume sweet food in moderate amounts, preferring natural sweets. And you should avoid refined sugar as much as possible – it does no good for your dosha.

This should probably be a standalone post, but we can briefly mention that fasting in general is not great for Vata people, because Vata gets imbalanced rather quickly on empty stomach. If you need to have a kind of fast or need some internal cleansing, better follow a mono-diet on that day, or eat fruits. Anyways, once there will be an opportunity, we may cover this topic in another article.

Another topic for a separate post; in essence, since we are talking about a vegetarian diet, the major sources of protein are legumes, grains, dairy products and some vegetables.

Vata Dosha and a Raw Food

Raw food is not ideal; it is usually quite light, and may aggravate the dosha if eaten too often or in large quantities. You can have a fresh salad once in a while, but for regular meals prefer cooked food (but don’t indulge in fried food too much either).

25 thoughts on “Vata Dosha Food List: What to Eat and What to Avoid”