First of all, there are two sides of this matter: one is a person of Vata Kapha dosha type, and the other is Kapha-Vata type. Doesn’t make sense? Well, when you have double dosha constitution, it means that the first dosha is more prominent, but the second one also has a significant influence on a person.

So, if you case is Vata-Kapha, then you are probably creative, enthusiastic and sensitive person, but at the same time you are emotionally stable, peaceful, compassionate, calm and sympathetic.

If you are Kapha-Vata, then Kapha is more manifested in your body, and Vata – in your mind. The person of this combination has a rather strong and stout body (or it can be of a normal size, but of a normal weight, not thin).

You are original, eager and compassionate; you understand people, have sympathy towards them; you are creative, but tend to be calm and quiet.

These descriptions are generalized; your personal traits may differ from these, and to know your dosha combination exactly, you need to take an ayurvedic dosha test. 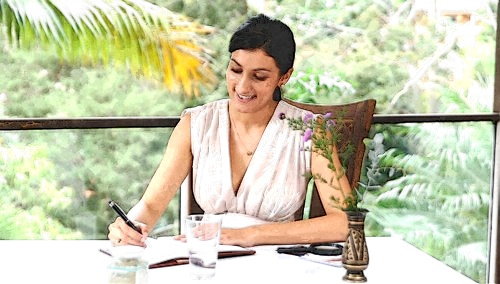 Vata’s appetite and digestion are weak and unstable. Kapha’s appetite is stable, but also rather weak (though it can be stronger than the one of Vata dosha, but still weaker than what Pitta has).

So generally, your appetite will be erratic and/or weak (but not always). But even if you have a strong appetite, it doesn’t necessarily mean that your digestion and food assimilation will be strong as well.

So, the weakest point will be digestion, and your diet should aim at its increase.

Choosing the right food is usually one of the most effective ways to kindle the digestive fire, but the problem is that Vata and Kapha require foods of the opposite characteristics (Vata needs something grounding, and Kapha – light). So, what to do?

The simple approach is to deal with each dosha according to the circumstances; for example, when there are symptoms of Vata imbalance, prioritize foods that reduce it. If Kapha is aggravated, have meals suitable for this dosha.

Another thing to consider is the season and time of the day. If your doshas are more or less of an equal state at present moment, you can plan your meals so that you have separate dishes for each dosha to cater them both. Or you can adjust your recipes so that they include ingredients for both of your types.

Another (somewhat easier) way to manage your constitutional type and its meals is to consider tastes, suitable for each dosha.

Well, since Vata and Kapha are the opposite doshas, the tastes are… also opposite: sweet, sour and salty are good for Vata, but aggravate Kapha; pungent, bitter and astringent increase Vata, but pacify Kapha.

But everything is not really that difficult; you simply need to use those tastes that pacify the dosha, which is currently out of balance; or if the doshas are fine, then just favor the tastes you want. Actually, Ayurveda says that to be fully satisfied with your meals you need to experience all the 6 tastes during your meals. Of course, the proportion of these tastes should be according to the proportion of the doshas in your body.

There is one quality though, which is good for both doshas – it is warmness, since the both are cold. So make sure your meals are warm or even hot, then you make the both Vata and Kapha happy. 🙂

Following these rules will help you maintain both doshas in balance.

– Warmth and energy is what lacking in both Kapha and Vata; since food is one of the primary energy sources, make sure your food is warm and freshly cooked. Avoid or minimize refrigerated meals, frozen or cold foodstuff (especially cold drinks), reheated leftovers from the previous day (they have little to no prana or energy in them).

– Eat in small quantities at regular intervals of time to make sure every bit of your food is properly digested. For your dosha combination eating a big meal at a single sitting is just ineffective, because due to the relatively weak digestive fire a huge lump of food will not be digested properly, leading to the accumulation of toxins and consequently to the increase in both doshas and the associated health and mental problems.

– Eat only when you feel real hunger. When you feel a healthy hunger, it means that your digestive fire has become strong enough to let the food be assimilated to the optimal degree.

How do I know whether my hunger or appetite is real or not? It’s easy: first of all, your desire for food is accompanied by some feeling of lightness in the stomach, and energy in the body (it may be subjective, but anyway). Secondly, your burp will be clear, without any smell or taste of previous meal.

– Chew every bit of your food thoroughly; according to Ayurvedic practitioners, almost half of the digestive process goes in the mouth while chewing, which brakes food into smaller pieces, making it easier for the stomach to digest the food.

– To be able to chew nicely, you need to take your meals in a calm environment, with a peaceful state of mind. If you try eating this way, you will be able to experience a dramatic positive change in your digestion, health and mood after a relatively short period of time. Of course, your meals should match your dosha, and be wholesome enough.

Avoid eating while walking, talking or doing some work, because it will distract your attention from meals to other things, you will chew poorly, and the result will be slow digestion, gas, the feeling of heaviness in the stomach, and some sort of irritation in the mind – the signs that your doshas became imbalanced.

– Never ever drink any liquid immediately before or after the meals. You can have some liquids at least one hour before or after your meals. You can also have some water while you are eating (boiled water usually is fine) to moisten your food, like few sips if your body demands it. I do it myself and find it helpful. I read that Swami Sivananda also recommended it.

You should also drink water throughout the day in moderate amounts.

– Your breakfast and dinner should be light; the biggest meal you have is during the lunch time. Some Ayurvedic practitioners recommend eating breakfast within 1-2 hours after waking up, but you can adjust that time according to your needs (I take shower and do my yoga routine, so for me it’s not always possible to eat within 2 hours after waking up, so I have my breakfast a bit later).

But your dinned should not be after 8 pm (having it before 6 pm is the best).

– While raw food is fine for Kapha people, for Kapha Vata dosha indulging in raw foods is not a very good idea. So prefer lightly cooked food with appropriate spices (such as ginger, coriander, turmeric, fenugreek and caraway seeds).

– The best fats for your dosha type are olive, sesame and mustard oil, as well as ghee (clarified butter, which is actually good for every dosha).

– You can have up to 500ml of milk throughout the day; if you don’t like cow milk, you can opt for warm coconut milk with some turmeric; almond milk is another good choice for vegans.

– It’s better to avoid soy milk, since it aggravates Vata.

– You can also have some yogurt, but do it in the day time; taking it in the evening is possible only in summer (when the weather is warm). It’s better to avoid yogurt during the cold season.

– Butter is OK, when taken in small amounts, but ghee is much better.

– The best grains for you are brown and Basmati rice, wheat, oats, quinoa, amaranth, barley and buckwheat. Minimize or avoid using refined flour and dishes made with it, since it clogs your intestine like anything.

Whole cereals and whole meal flour are best options; but take cereals along with clarified butter (ghee) to moisten them. In case you feel that your Kapha dosha is imbalanced, prefer millets with some ghee or barley as main grains in your diet.

– Proteins. Since we have a vegetarian blog here, I won’t discuss any meat; but as for the protein sources, Mung (moong) Dahl and lentils can be good options. Soak these beans in water before cooking, and cook with such spices, as asafoetida, turmeric, ginger and cumin.

– All vegetables are good for you, but don’t go too much for raw and for those that contain lots of fiber (like cauliflower, jackfruit, artichoke, etc.), because they may cause Vata imbalance.

You don’t have to avoid them completely, but minimize, and cook them well before consuming.

The same refers to root vegetables (such as carrots) and starchy vegetables – you can eat them cooked and in small amounts.

– Almost all fruits are good, but minimize those that are too sour or too sweet. Cooked or baked fruits are usually digested easier.

– Nuts and seeds should be taken in moderation, and it’s better to have them lightly fried with ghee or olive oil, or roasted.

– Among the qualities of your foods sour, hot, pungent and salty should dominate (like in black pepper). Minimize these tastes: astringent, sweet and bitter. ‘To minimize’ doesn’t necessarily mean ‘to avoid’; just use them in moderation. You still need all the six tastes to be present in your diet to maintain all the doshas in balance. Even if your Pitta is not very significant compared to other dosha, you still need to keep everything well-balanced.

– The stimulants like alcohol, and even tea and coffee should be better avoided completely. 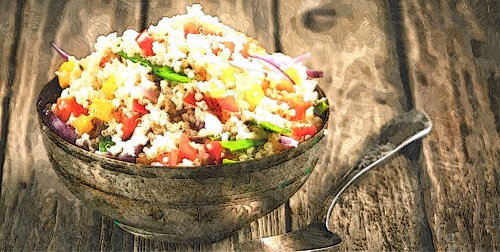 Here is an example of Vata-Kapha food plan; you can refer to when making your own diet program.

Start your day with a glass of warm water; after that you can take some nuts, like almonds (you can add raisins to them too). But soak them night before, chew thoroughly.

2-3 times a day you can have an herbal tea of your choice, or use this recipe:

Boil everything in water (it will evaporate by that extra half, so you’ll get one glass of tea).

Strain it and serve hot or lukewarm. You can add some maple syrup or raw sugar, but don’t add too much.

As we mentioned already, it should be light, so you can have a cereal, some fruits, herbal tea or milk with whole grain bread and butter.

Can I skip my breakfast? Well, there may be cases you may want to do so, but normally skipping the breakfast will aggravate Vata dosha, so it’s not the best idea. But eating heavy or refined meals at breakfast is just as bad as skipping it altogether, or even worse.

You can drink something an hour before your lunch, like herbal tea or buttermilk.

For the lunch you can have cooked grains with ghee or other healthy fats, wholegrain bread, beans or lentils and cooked vegetables. In the most times use the appropriate spices for your dishes as they aid your digestion and provide a warming effect.

You can use the same type of food for the dinner, but in smaller quantities; there can be soups as well. The best spices for soups are ginger and black pepper, as they have warming qualities.

So, thus ends the description of Vata-Kapha balancing diet according to Ayurveda.