I assume that by the term “Ashtanga yoga” we mean Ashtanga-vinyasa-yoga as taught in the school of Pattabhi Jois. While the bandhas are same in all the yoga traditions and styles, in ashtanga-vinyasa there are three main bandhas used: mula-banddha, uddiyana-bandha and jalandhara-bandha. The first two are the main bandhas.

What Are The Bandhas In Yoga?

Bandha means a “knot”. Bandhas are the energy locks that participate in the regulation of the prana flow through the body. The bandhas are activated by the strain of specific muscle groups. Bandhas help to influence the physical, pranic and psychic body, stimulate kundalini and chakras. 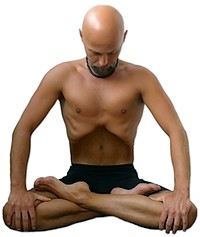 Mula-bandha means the root knot, and it is performed by the straining of the perineum muscles. Uddiyana-bandha (uddiyana means “to take off”) is the tension of the lower abdomen muscles. These both bandhas direct prana upward through the bodily main energy channel called sushumna, which is situated along the spine. These bandhas work similar to your heart by with prana or subtle energy. The prana flows through the body via nadis or the energy channels. Jalandhara-bandha is the throat lock, when you place your chin on your chest (just where there is the dimple in the place where chest and neck are connected). Jalandhara-bandha helps to spread the raised energy across the body and prevents unnecessary energy loss through the upper body part.

Yoga bandhas locks in Ashtanga yoga are actively used: mula and uddiyana-bandhas are used almost always in every asana, and jalandhara is used in some of them, such as sarvangasana.

There are other practices called mudras that also have a subtle influence on our body and consciousness. Yoga mudras and bandhas were usually kept secret in ancient times due to their powerful effects and benefits. For example, some yoga bandhas benefits include the anti-aging properties, and even the aging process reversing (to some extent), the improvement or even the restoration the bodily organ proper functioning, the increase in human various talents and abilities, etc. Also bandhas helped to elevate the practitioner’s consciousness and allowed to conquer the mind, making the sadhaka (yoga student) the controller of their own destiny. Today yoga bandhas are the integral part of almost every yoga routine.

Due to the great power these bandhas offer it is advised to learn them under the guidance of a qualified yoga teacher to avoid any damage to your body or mind due to the uncontrolled energy flow.

One thought on “Bandhas In Ashtanga Yoga”